Valentine’s Day is here! This means lots of balloons, flowers, chocolates, and sporting Scarlet A’s on your chest if you have been unfaithful to your spouse- wait what?

In some cases, breaking this law by cheating on your significant other can be punishable by a fine, or in severe cases, even time in jail. For instance, in the state of New Hampshire, adultery and cheating is considered to be a Class B misdemeanor and can cost perpetrators a fine of $1,200. Last year, Colorado repealed its anti-adultery law.

These states’ anti-adultery laws are, as you could probably guess, largely unenforceable- and they rarely are. The laws are not so much a new idea, but instead still intact from the United States somewhat Puritanical beginnings. 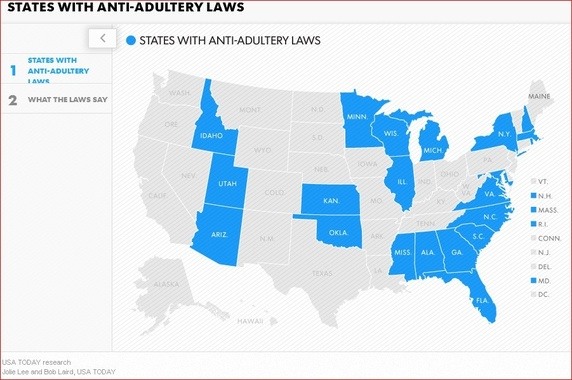 Realistically, cheating on your spouse or “committing adultery” poses an almost nonexistent chance of being prosecuted. While it is unpunishable and unenforced by law, adultery could still have major consequences otherwise. In some cases, cheating in your marriage can have repercussions such as impacting custody battles negatively during a divorce. There is a stigma and stereotype attached to those who do commit adultery, and the civil and social consequences that result from it are more than likely worse than a simple fine.

This punishment for adultery moves beyond the states as well. In the US Military, cheating on your wife or husband provides grounds for being dishonorably discharged and confined for one year in severe cases. While this may seem far-fetched, it has been reported that in the last eight years alone, a whopping 30% of commanders in the US Army who were fired committed sexual misconduct, thus resulting in their termination.

Adultery is only a misdemeanor in the majority of the states who hold laws regarding it. Some of states however, categorize the act of adultery as a felony— Michigan and Wisconsin being just two of these states.

The crime of adultery varies widely by state in regard to the class of crime, if it is enforced, and the penalty associated with it. In the state of Maryland, perpetrators get off with barely any legal punishment aside from a $10 fine. However, just a few hours north in Massachusetts, someone who breaks this law can face up to a total of 3 years in jail.

The Supreme Court ruled in Lawrence v. Texas that sexual relations between two consenting adults is, in fact, legal regardless of marital status. It also ruled that state laws that ban “homosexual sodomy” are considered unconstitutional. The issue of adultery and punishment for it is still somewhere in that grey area between being unconstitutional and morally upright. While many have their own opinion as to whether or not adultery should be lawfully punished, the subject itself brings up other issues, including the right to privacy.

If you or someone you know has the suspicion of being cheated on, feel free to contact us at any time for any tips, questions, or to explore your other options. At Striker Pierce, we believe that you deserve to know.

What do you think of these states anti-adultery laws? Is it okay for states to penalize adulterers under the law, or are the social repercussions of cheating while married punishment enough? Comment and let us know below your thoughts on this unconventional topic.