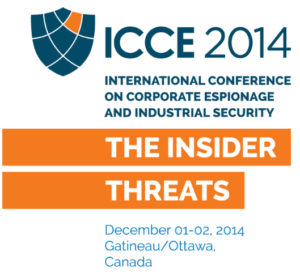 WASHINGTON, DC, USA, October 3, 2014 Brian O’Shea, CEO and Founder of Striker Pierce Investigations, will speak at the International Conference on Corporate Espionage and Industrial Security in Ottawa on December 1, 2014.

The conference, held every year in Ottawa for the international business community is the only conference on corporate espionage and industrial security focusing on protecting classified information and trade secrets, presented in cooperation with private and public sector experts.

Michel Juneau-Katsuya, the conference organizer and author of several books on the subject, stated: “I believe having intelligence professionals joining our other important speakers really gives a lot to this conference that will help participants learn to think like a collector in order to protect against them.”

Brian O’Shea brings over 20 years of experience in international intelligence operations, investigations, competitive intelligence, and counter-intelligence expertise to this already impressive line up of speakers.

“I really believe that the true threat to businesses is recognizing that sometimes employees do not even realize they are giving away company secrets,” stated O’Shea at a recent event in New York City. “Protecting your information from outsiders who exploit these employees can only be accomplished if you think like a collector. This way you can recognize when you are being targeted and eventually stop the intelligence loss.”

Mr. O’Shea’s firm, Striker Pierce Investigations, has been assisting corporate clients in counter-intelligence through direct action, custom solutions, and even training of Clients’ employees. Regardless of the industry, O’Shea and his Team at Striker Pierce have seen all manner of collection and have worked for years to help Client’s grow stronger in their defense of collections efforts.

Join Mr. O’Shea and many more in Ottawa December 1 and 2. http://icceconferences.com/app.php/

Striker Pierce also leverages its network of over 230 industry and private individuals domestically and internationally to support operations as appropriate or when needed. In addition to the entire Commonwealth of Virginia, within the United States, this includes (but is not limited to) Austin, Baltimore, Boise, Boston, Denver, Jacksonville (Florida), Los Angeles, New York City, Philadelphia, Portland (Maine), Reno/Tahoe, Salt Lake City, San Francisco and Seattle/Tacoma.

Whether your case is personal or professional in nature, large or small in scale, Striker Pierce has the skills, experience, and past performance to continually deliver solutions to all of our customers problems.

About the ICCE 2014(http://icceconferences.com/app.php/): Why ICCE, and Why Now?

•There is an alarming lack of knowledge/awareness within companies of the threats they face.
•Companies are not sufficiently prepared to face insider threats, as demonstrated by the cases of Edward Snowden, Jeffrey Deslisle and Qing Quinton Huang.
•This is not an intelligence conference but rather a conference focusing on assisting Company and Department Security Officers to protect against corporate espionage and adopt sound security practices.
•It is the only conference in North America dedicated to helping companies protect themselves from Corporate Espionage, Insider Threats, and Theft of Intellectual Property and Trade Secrets.
•It is the only non-governmental conference in the world to offer presentations at the “secret” level for non-government security officers.
•It is the only conference in North America where you can meet and hear real spies talking about how they were able to steal secrets from companies and governments.